life in the cave

LIFE IN THE CAVE 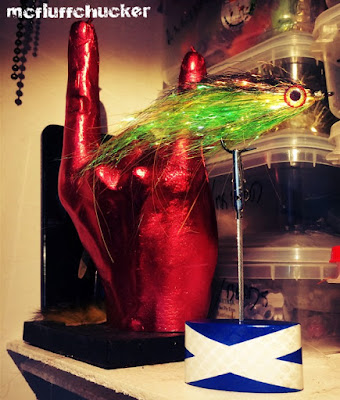 so it continues , life in the cave yup tying tying tying and not much else but hey its what i do so not a massive long blog this time just heavy on pictures . ill mention again that most of my pictures of flies these days have my name on , now id like to say this isnt to big me up or show off (thats not me) its simply to stop the African scam fly tiers from stealing fly pictures as there own so the easiest way to make things difficult is to put my name on them .

( a massive thanks to rach and cez from the wonderful pike and slippers blog for my fantastic birthday present , the hornz will appear often )

some news ive been developing a new medium for the fly tier , a little something i have called skinz if you are linked in with me on facebook you'll have seen some bits about it but its a great link between epoxy and uv for heads and bodies and to be honest im quite excited about about it as its looking really great im hoping for an end of august launch for it and i will post on the blog and facebook when its ready for shipping , as with these things i have to get all the prep done first like tying videos and the like so please stay tuned , in the mean time here is some maggots a sandeel and a baitfish made with skinz . 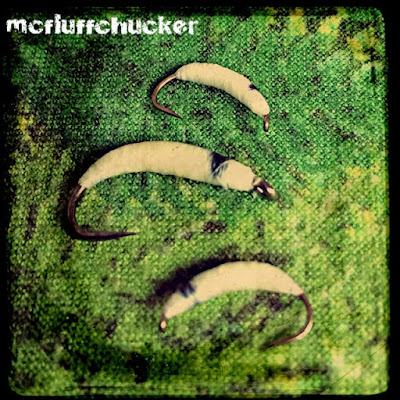 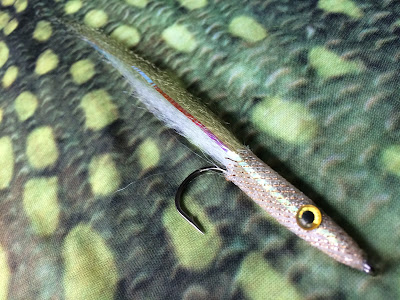 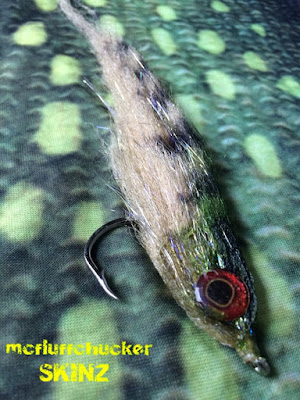 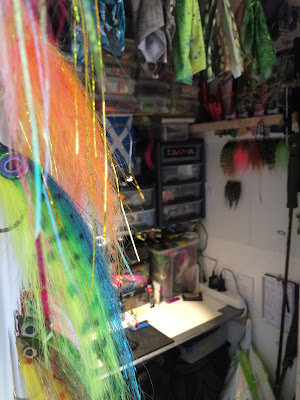 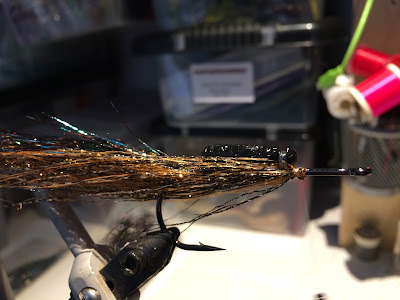 tying in a rattle on a full flash fly

and the finished fly rattle what rattle 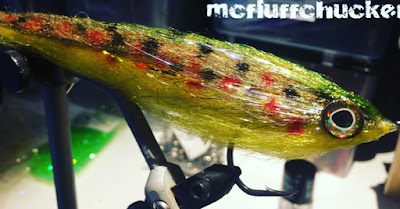 this trout ep pattern now has a new home down south 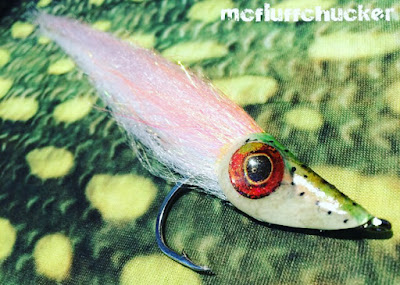 this fly was one of the light bulb moments i sometimes have , i found in a box tucked away at the back of the cave , you know we all have those boxes were we throw stuff and think "im not sure what im going to do with this so ill put it there until i think of something " well i kinda shot myself in the foot with this one as the uv activated glow in the dark glowworm sheets are no longer available  so im guessing whatever im going to make with these like the fly above will remain firmly in my own boxes ........deercreek people please start doing this stuff again , i have lots of ideas and not enough sheet left, bummer . 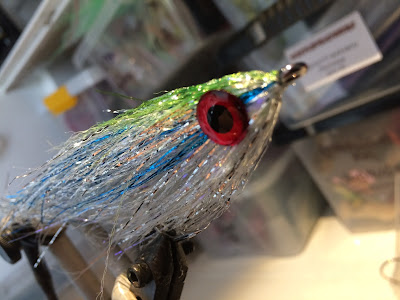 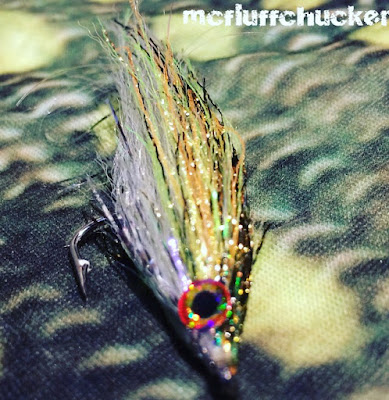 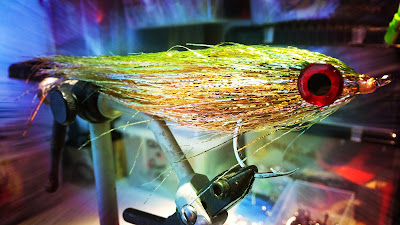 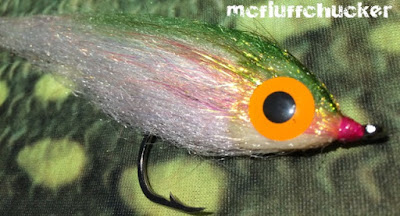 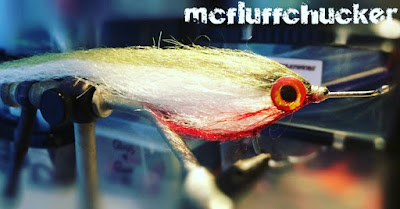 tarpon tied roach , these eyes are just fantastic and really lift a pattern eyes are available from deercreek volcano eyes 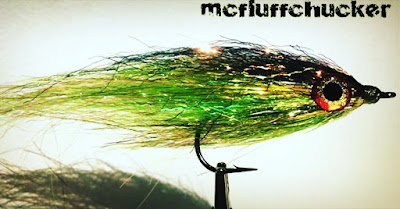 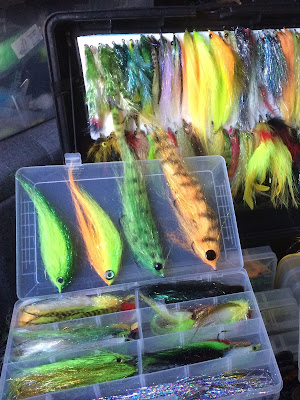 as you'll be aware if you follow my blog ive been mostly tying smaller patterns up to six/seven inchs , and ive kinda been neglecting the larger patterns , thing is the smaller patterns work fantastic and a lot of folks catch a lot of fish on them well it wasn't till the other day when i was sorting some boxes out that i realized that i had actually given most of the big ones away  and i do have a soft spot for making ridiculously massive flies , but i actually like to make them so you can actually fish them so although these monsters are 12 inchs plus you can comfortably fish them all day so i set to work stocking up the bigger flies , although the downside is i actually now need a new box for them

classic fire tiger pattern with a little twist , the fire tiger is one of those patterns that just keep giving and a fly that will catch in pretty much any conditions and loads of species around the globe both fresh and saltwater 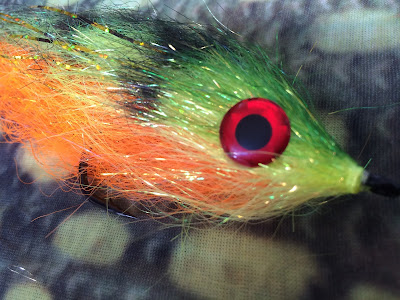 another monster this one i pretty much had no idea what i was making , i put the hook in the vice and got out some white fiber and just went from there , i literally had no idea what it was going to look like or if the colors would actually work even down to eye color so ok it worked out fine , sometimes the only limits to what we tye is set by our own imagination limits ,

more big stuff will be appearing  soon as i was getting low on materials and was waiting for some stuff to arrive which hasn't so ive tried a new supplier so lets see how that turns out , i have bought stuff from him on ebay before but i came across a random post on ebay and realized he has now launched a new website , so expect a full review next week , oh and more monster flees 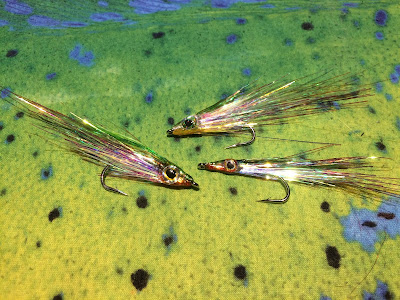 the 3 flies above were actually tied with scrap material , i had a few bits of flash left and being scottish i through nothing away so quite pleased with these , look kinda cool and will catch fish i think 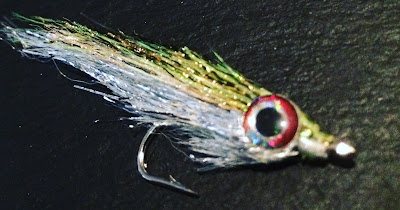 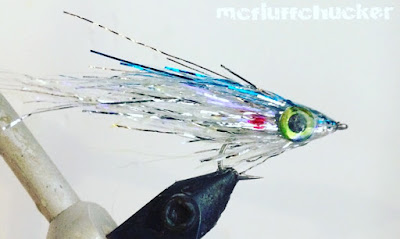 flies above are also down with leftover materials , well except for the eyes so dont chuck bits away theirs a use for everything and you can get some pretty cool flies out of scrap material , the flies above you could pretty much use either in the sea for mini species or in canals or drains for perch right down to chucking at rainbow trout in stocked fisheries "free the scrap"

and before i go i have had a couple of folks asking about how to use fiber that arrives crinkled and what to make with it , well to be honest you could tye it normally but i prefer to tye with straight fiber so here is a little video on how to fox this problem enjoy. 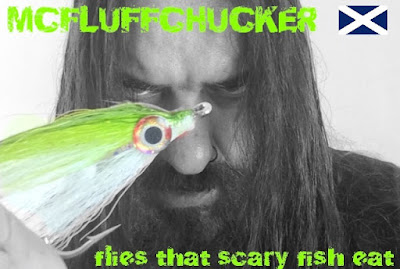 Posted by dave lindsay at 21:43 No comments:

well that indeed is the question , you know i still laugh when i look at my flys well if you saw one of those around your head you wouldn't be swatting it you'd be running in the other direction i think , yea you know we call flies "flies" in the loosest possible way because whet we are aiming for is actually to make something that looks like a fish from fur and feathers (or synthetics) so technically not a fly so we are not technically fly fishing or are we , we dont cast a fly we cast a bait fish , we use fly rods as the method of delivering the fish to "the fish"  i suppose we are just waiting for somebody to come up with the right terminology for what we do with the fly rod or am i just thinking too much into this .......probably .

so kinda on the same track after the success of my new casting fly for lure rods i decided to look more into it because some people have said to me "well you know i love the look of flies but i cant fly fish" this usually means the guys are stuck on just fishing with lure rods or dont want to fork out a load of money for new gear to do it .

its quite funny , i remember a guy from a biggish club in the uk that saw some fish being caught on flies and wanted to jump on the bandwagon and be one of the cool guys so of he went and spent a bloody fortune on gear and headed to his local to fish , after a few days a post was made on there forum asking how the said chap got on well the reply was something like this

"went for a few hours and didnt catch anything , this fly fishing isn't for me cant get any distance"

he then promptly sold all his fly stuff without ever going again or experiencing the joy of a fly caught pike . you know every club or social media page has one , that one guy who really has all the gear and no idea , in fact what he should have done was gone with somebody who could show him the ropes  how to cast etc this is really something you dont just pick up in an hour like chucking a half a dead fish out and watching your rod or listening for a beep beep beep of your alarm.

its something that takes a hell of a lot of practice over a long time , but you can be competent enough to chuck a fairly decent line in a few hours with some help but every time you go out your still learning and fine tuning what you do , some people take to it some dont  , i love fly fishing as a beautiful art form and am constantly learning every time i go out even after all these years .

stick with it the rewards are great

so back to the original question when is a fly not a fly , well when its a lure so after the tests with the casting lure i decided that even the first design i did cast well enough and got enough distance to keep even that  mentioned club member happy and this was only a smallish lure so i sat at the vice and had a look at materials and thought about how i was going to build the perfect fly/lure and after a while i came up with these . 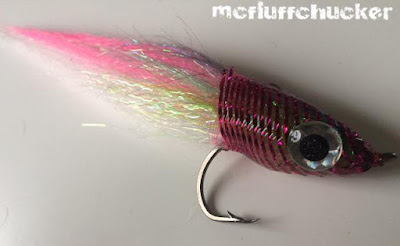 these are around 10 inchs long with epoxy coated heads , the reason these are only coated is that i wanted to create a lure that was heavy enough for a good cast but also light enough to be able to dance in the water 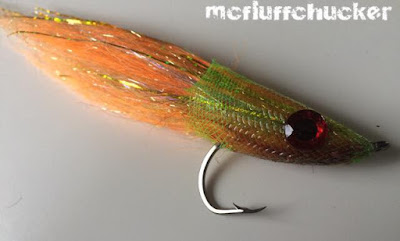 these are only proto types at the moment and plan to make a few more before i field test them , fishing them the correct way is what will make them fish , as i said before the heads are not solid like your average jerkbait it coated on the outside the reason for this is i want to be able to fish them like a sink and draw style from the old days of pike bait fishing where you would let the fish sink to the bottom then lift your rod to raise it up , wind in the slack while its sinking and repeat , this way you will take full advantage of the materials movement in the water which will be something like this fly below

im sure you get the idea but if the head was to heavy it would sink to fast and the materials wouldn't be able to do there job properly because im relining on the movement of the materials to provoke a strike ,   predator instinct and all that .

now the other way of fishing this is to fish it like a jerk bait with short taps of the rod tip to impart movement , now this i haven't tried yet but knowing how my flys work and having done a lot of jerkbait way back before it became popular with the masses im pretty sure that these will act the same way . so what next

well hopefully by the time your reading this i will have been out and tried them and hopefully got some underwater footage also , im also toying with the idea of placing stinger hooks at the rear so will make a couple of those up also  for testing , but watch this space as there seems to be a bit of interest in these from my non fly fishing pals . 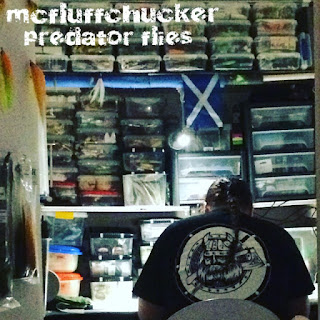 Posted by dave lindsay at 17:23 No comments: