life in the cave continues

THERE'S SOME IDIOTS ABOUT
Ok so im going to say a few short words here , im not having a rant or anything im just really curious , as you may be aware I do a few videos now and again on youtube , you know just sharing the knowledge or for any kind of gain or reward , i just love to do what I do to share the knowledge and help people who are maybe new to the sport to tie a few flies and catch fish and that’s it , I don’t claim and never have claimed to be the next dogs bollox fly tier in fact in the past ive turned down some great offers from larger company’s to do ranges for them not what im about people despite what brainless idiots say behind closed forums

so what gets me is when somebody presses the dislike button on youtube to one of my videos OK if there’s an aspect on there you don’t like then by all means leave a message or ask a question simple as that , this way it helps me to help others by sorting any issues out with the videos I mean lets face it I haven’t got multi angel cameras or directors or editing suites I just sit there with a digital camera that allows me to record around 15 mins of footage at a time and up load it , so if you come across my videos and there's something you don’t like please leave a message and ill do my best to look at any issues , don’t just press the dislike button , funnily enough there was a few dislikes on my videos on one particular not so long ago and I managed to trace the area where they came from mmmmmmm a suburb of Edinburgh wonder who that could have been …...how sad
----------------------------
Kicking out the cobwebs 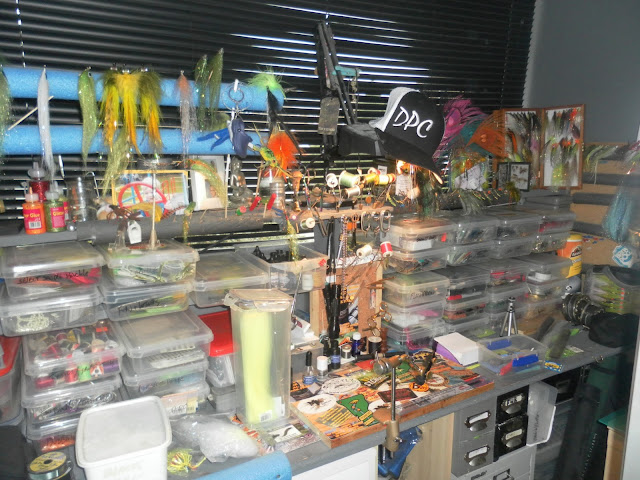 so with the advent of a lovely sunny day I decided that cleaning up my desk was not top of my to do list I did have every intention of doing it in fact I went as far as to get a bag out for the rubbish I walked to my desk and was just about to pick something up to tidy away when I heard that familiar tone of the skype going off on the laptop this time of day it could only be one person 7am in America got to be my favourite redneck brother on his way to work , so I go and answer the call and get into a conversation about flies and then I get an idea into my head and as soon as I come of the call I get into tying flies for the day and the desk will have to wait another day oh well. 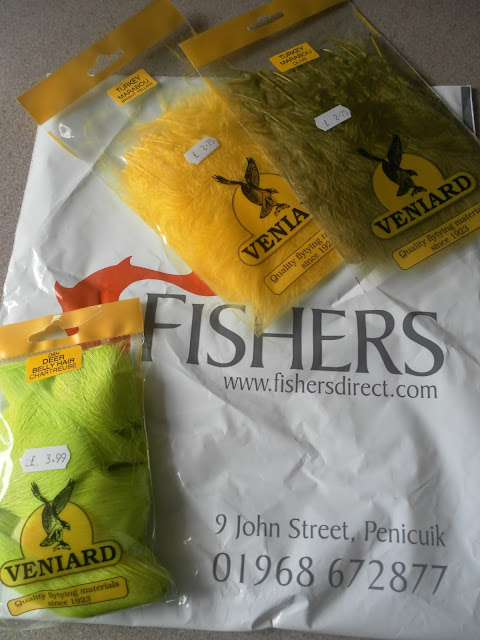 I had to go and deliver some flies to a friend in a town close by to me and id been meaning for a while to visit a new tackle shop that had opened there , you see although you can of course buy lots of stuff on line there’s nothing beats that feeling of walking round a tackle shop looking at stuff, you see tackle shops used to be the place to be to meet friends , talk fishing , and of course exaggerate the size of fish we caught and 9 times out of ten you’d get a cuppa as well (a warm beverage to my American friends) so I was quite excited to actually get into the shop to have a look round and although I really didn’t need anything(apart from white ep fibre) I still picked up a couple of items and spent a little cash (ill use them sooner or later), tackle shops are on the decline in this country so imagine if everybody who walked past a tackle shop picked up just a bag of feathers of a pack of hooks we could stop the decline so support your local shop folks and a big shout out to mike at www.fishersdirect.com for having a great looking new shop and bucking the trend . 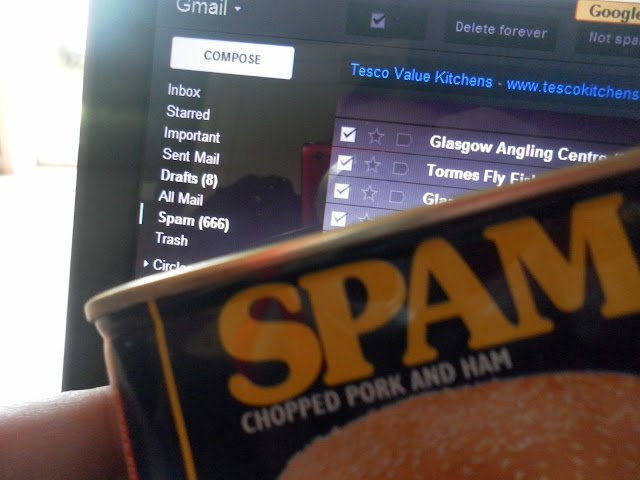 im one of those people who like spam I love to have it in my sandwiches when I go fishing in fact theres a million different uses for the stuff so imagine my shock when I saw this in my inbox my world has been turned upside down im going to have to go back to scotch eggs and pork pies for fishing …............:-( 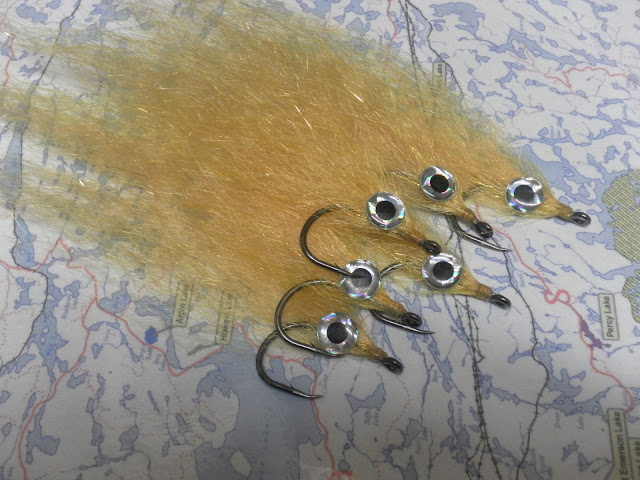 also been pretty busy tying up a new range for the fellas over at ww.predatorbite.com the results of which you can see here and below pictures 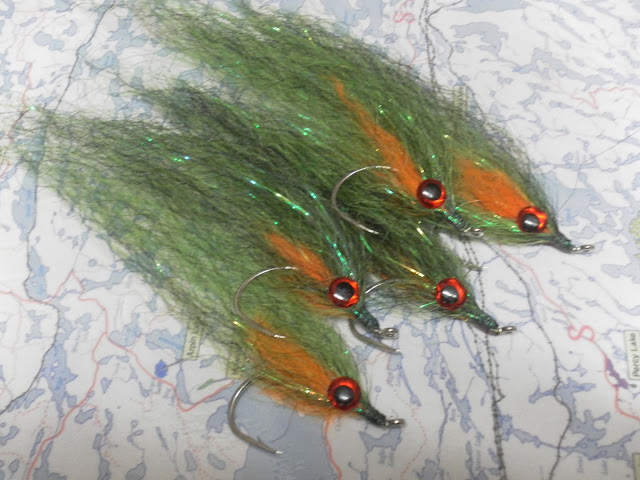 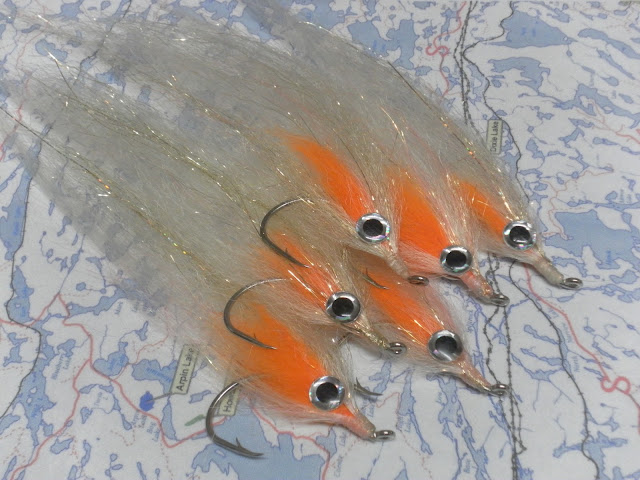 I suspect the last 2 colours will be a top seller , anyway keep checking back to the predatorbite website they will be available shortly
–
BIG DNA BAITFISH

I love tying with DNA it makes some fantastic looking baitfish the only downside is for the amount of material you get in a pack its just to bloody expensive to tie a whole lot of big pike flies up with even if I tie it sparingly I still dont get a lot of flies this size out of pack but dam they look good in the water , ive never even seen anything resembling a cheap version of it guess they have that market sown up. 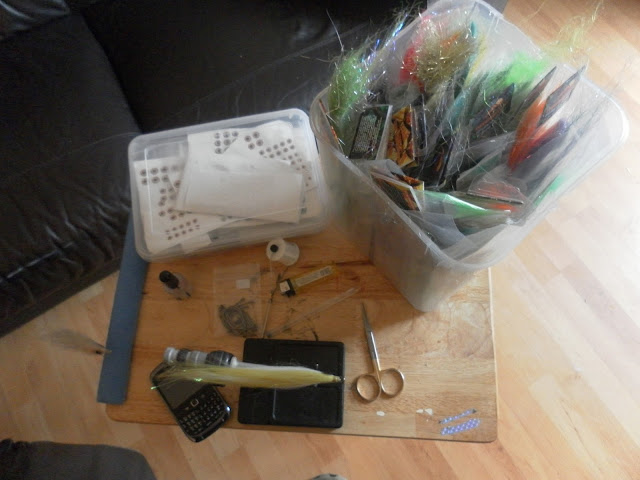 I had the destroyer coming round for a tying session , my cave a little cold just now so we use a small table in the living room , today gliss and glint plus will feature heavily in the patterns the thing is with these tying sessions is you just never know what will happen we get some great ideas on hooks and we talk about future plans target species and where to get them and every so often you get a complete surprise buddy poppy over for a chat 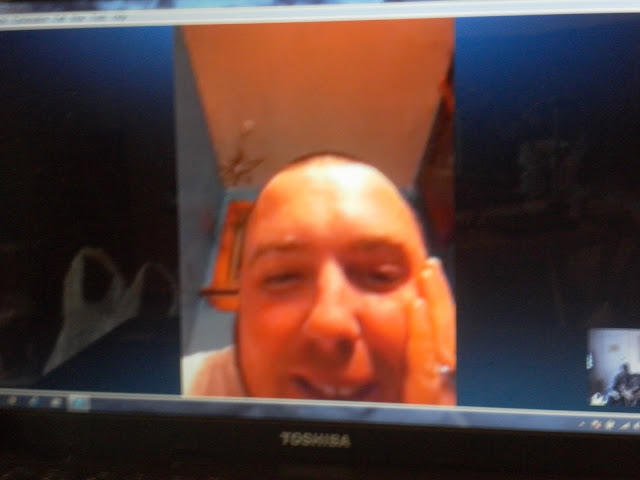 yup my brother from another mother and vermont fly guy ken (i can count to five now) capsey popped up on the skype while we were tying , now its always good to see ken it was like 6.30 am his time and he was just up and seeing what we were up to , after a few seconds chatting I suddenly realised where he was , because folks I have been across the pond and fished and lived with brother ken for a week and I too have laid log in the very toilet he was sitting on while skyping me , yes folks you read right the redneck was sitting on the can while talking to us the destroyers face was a picture when I told him I haven’t laughed so much since I fell off kens boat . 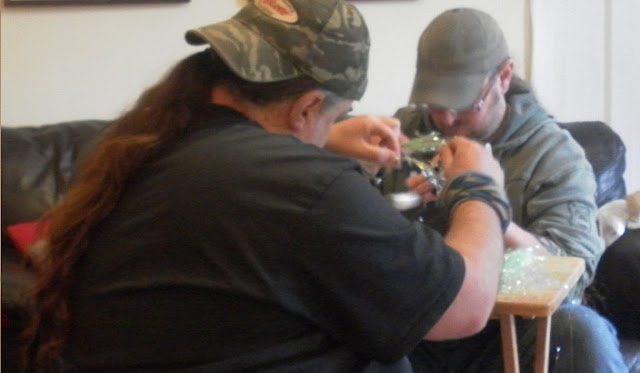 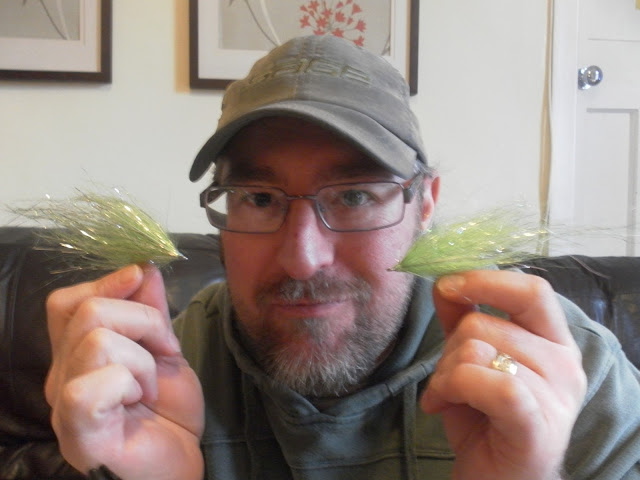 we were tying up slightly smaller stuff today as well as the the bigger ones smaller flies did so well for us last year so filling up the boxes with smaller flies aint going to go to waste , the destroyer has pretty much nailed the tying of bigger flies considering he had never tied anything bigger than a trout fly a few months ago he’s really got it down to a t now producing some respectable flies 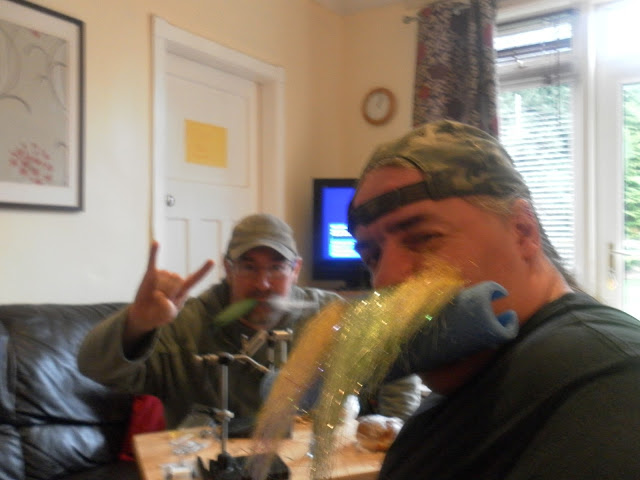 so another tying session drawers to a close its quite amazing how quick the time goes when we do this but we do get a few flies made and hopefully we will get out on the water soon to try the thing out , nothing worse than making great looking flies and not being able to fish them soon though .

GLISS AND GLINT PLUS RAINBOW TROUT 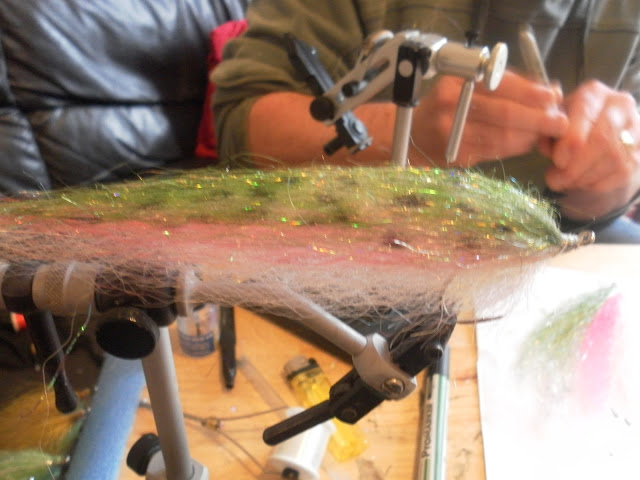 this fly now has eyes on and is currently making its way across the Atlantic to brother ken to try out , I like this pattern it turned out really nice with the coloration I think I may have to tie a few more up , although funnily enough ive not really had that much success with rainbow trout patterns but then ive never tried a gliss one before so mmmm mabey this will do the trick 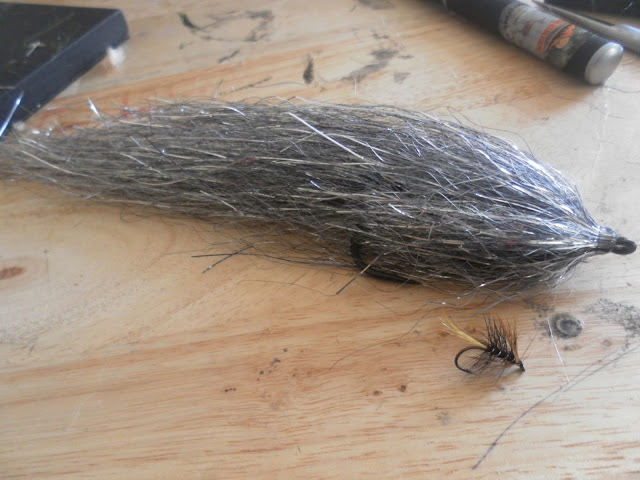 the destroyer was tying a few traditional Scottish brown trout flies also today above is his kate McLaren the beast above it was tied by yours truly a monstrous thing that is tied with a foam body underneath so it floats on the surface , the reason for this fly is that I had no end of big fish last year trying to take hooked jacks of the hook so this will make a lot of noise and movement on the surface and hopefully represent a hooked struggling fish im very confident it will work especially as im about to take delivery of so new and improved jackpike colour gliss and glint plus cant wait to try these out .

looks like we may get out after saltwater species next week , the destroyer hasn’t fly fished in the saltwater before so fingers crossed we may actually get out next week , and to maximise the chances of actually getting something on the hook ive tied up up a load of DNA sandeels with medium sized gold aluminium recessed sea eyes and deercreeks 3d eyes in the recess , these are tied on dai reki 1/0 hooks I now have a box full of these things so I really hope we can get out next week as we are both suffering withdrawal symptoms from not fishing here’s hoping , and a hopefully full report next week

Thanks dave for the shout. I luv the look of that white one with the dash of orange. Its got to be a "killer".

Appreciate your videos. One can never learn enough!

thanks for the cool comments folks