life in foam
Finally I manage to get some of my favourite foam, for the past couple of years ken over at pike adventures has been periodically sending me care packs of foam that he uses, the reason for this is I couldn’t get any of this fine stuff here and it makes the most amazing foam heads, I found it quite by chance to be honest id, headed up to my local hobbycraft store here in the uk to buy another couple of those big plastic boxes I was talking about the other day and as the store was very quiet being early in the morning I spotted a bod stacking some shelves so I just on the off chance and in case I had just overlooked them asked if they had any and yes they did so I was duly shown to the shelf where it was and it was perfect and fairly cheap as well £3.99 uk although the sheets aren’t as big as the ones I get from ken it’s not really that much of a problem so I’ll be doing some flies tomorrow with it in fact as I’m writing this blog in advance of posting I’ll probably have some pictures below, I find it better writing at the weekend and over the week then posting at the end of the week keeps me fresh and hopefully you’ll have more interesting reads anyway that’s my way of thinking
THE FOAM 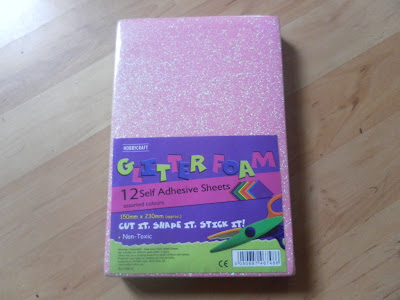 It comes in pretty much all the colours you as a pred head fly tier could want as you can see from the picture below oh and there’s plenty enough to make a shed load of flies pretty good value if you ask me and if you’re someone who makes lots of crease flies this is perfect I have to give a massive thanks to ken who’s kept me supplied with it over the year, owe you one brother 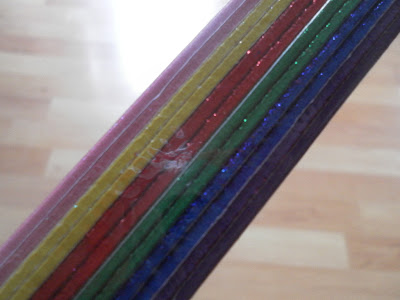 As promised sneaked a quick slim line foam head. Although there is a small story behind this and nothing tom do with a miracle fly that bags up fish all day no the story is I actually had someone interested in seeing how I did the head so I said to the fella in question that id do a video for it as it would be a lot easier to explain than in an email.
0--------------0
So with the kids away to school and the wife at university settled myself in and did the video and it went very well, I got everything across I thought really well and in 12mins good job , well it was good job until I reviewed the footage and found that I had a great big clump of tissue stuck under my nose throughout the whole thing , mental note to self don’t do videos when your choked up with the cold ………..bin that footage 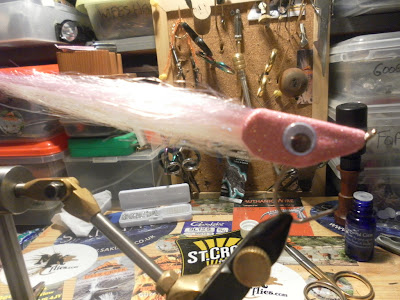 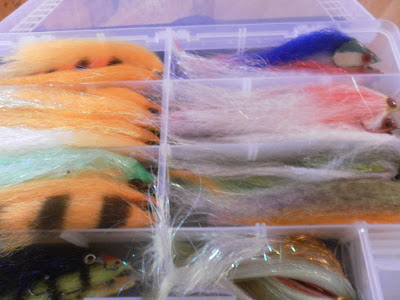 I love the boxes where you can change the size of the compartments saves a whole lot of messing about the flies above are on the large size these are probably as big as they get sometimes I just get crazy and use big flies so there they are lined up ready to go, I know there’s folks out there that maybe have 3 flies that they ever fish with and they do well on them good luck to em and to be honest wish I could get away with that, but I’m a tying head I just love to see how stuff works in the water how they move how they pulse how they move how I can improve on the design that’s just how I roll , I just change flies loads when I’m fishing so if you ever see me out there and I’m constantly digging in boxes its fascination not desperation
Sink the pink 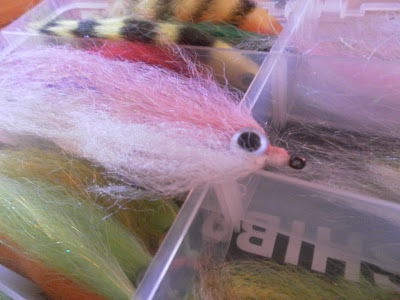 pink like blue is such an underrated fly colour especially here in the uk, the chewed to death specimen above has caught me a ton of fish the belly is plain old white ep fibre and the back is pink sf fibre in fact this fly I made way before any other blended synthetics were around and may I just say that this fly is still going strong and is still good for a bucket load of fish, just goes to show if ya tye em right they will last a long time this fly has always been and will always be in my box . tye one up in these colours using whatever you like you won’t be disappointed , oh and they rock in the saltwater as well folks
0--------------------------------------------0
PIMP MY PIKE ADVENTURE RIDE 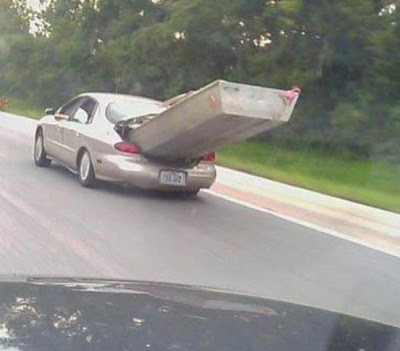 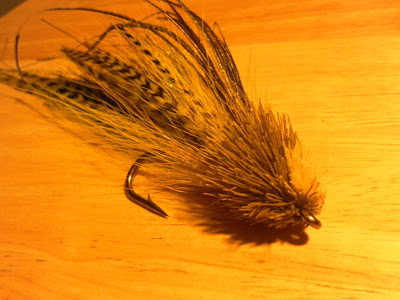 I have a fair bit of tying to do this week and usually when that’s the case ill warm myself up with a few ties for my own boxes and 9 times out of 10 I’ll sit and just grab a few materials out of the box and see what I can up with , the fly above was one of those , it started of being a basic buck tail type baitfish with a few bugger feathers thrown in but then as I got to the end I thought mmmmm how about I chuck some peacock hurl along the back so I did and it looked cool , so I was going to finish off with a saddle hackle head , then I thought mmmm lets add a couple of spun bits of deer hair roughly chopped to a head shape not tightly packed as I wanted it to sink and hey presto that looks bloody good in my eye.
Strange thing with the picture colour I had my cam on just a normal setting and the fly being basically olive and yellow it seemed to suck up the board colour into the picture weird but cool effect of course I’ll never be able to reproduce it again
0---------------------------------------------------------0
HOTCORE HEARTBEAT 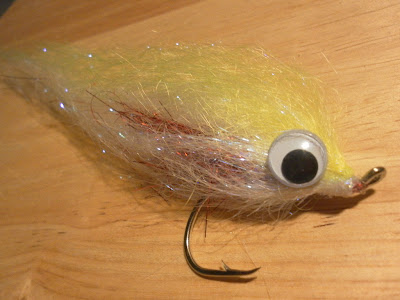 The hotcore fly continues to take scalps and there’s actually people doing copies of this killer pattern and doing their own tutorials for it on YouTube that’s very cool , but I’m forever pushing the boundaries with flies so I decided to do a new version of the hot core and above is the new version the hotcore heartbeat tied completely with deercreek gliss and glint plus and a core of red angel hair and let me tell you it’s looks bloody tasty in real life I will get it in the water as soon as possible sure it’s going to be a hit and I’ll be tying a few up in different colours and sizes over the next few weeks , ive also gone back to my roots and used googly eyes on this one for a bit of rattle .
0------------------------------------------0
Hit me with you laser beam 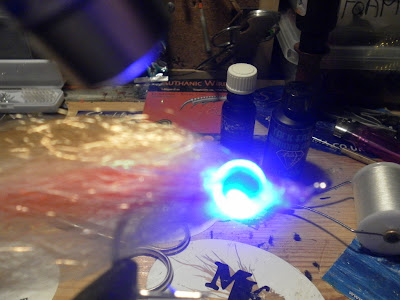 I didn’t ask for one but nick over at deercreek sent me one of the new laser torches there doing for curing there tack free uv , he sent me one not because he wanted me to push the product but simply because I have the torch and it would be good for me to compare the 2 when it comes to curing of course first thing to notice is that the torch beam is a lot more concentrated into one spot and a lot more powerful which means it will get right into the head getting you a good solid head I’ve only used it on one head so far as I’m busy building other patterns for clients just now but first impressions are very good , one thing I really do like is there new bottle with brush applicator that gets a big thumbs up from me if you wish to learn more about this product here is the link
http://www.deercreek.co.uk/Diamond-Hard-UV-resin-kit.html
0----------------------------------------0
BUG BOND VERSES DEERCREEK
(AND THE WINNER IS) 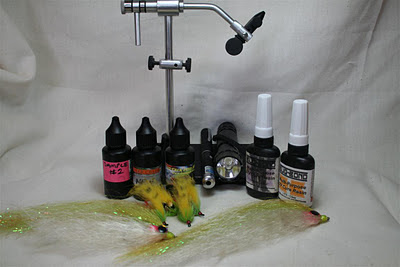 There’s been a lot of bitching from bitches lately saying that deercreeks diamond hard is shit and others saying that bug bond is the best thing since sliced bread etc. etc. etc. well to be honest I could have done a review of both but then I would have been accused of favouritism on the side of deercreek so it was nice when an in depth review appeared on another blog and as we all knew anyway deercreeks is superior to bug bond and a massive amount cheaper as well rather than dwell on it the review and test is just a click away go have a look for yourself
http://pikeflies.blogspot.com/2012_01_01_archive.html#5406443020928977487
I will however say this, last time I looked was a free country and you can of course use whatever the hell you like and if you want to spend an extra £30.00 pounds on a kit that doesn’t performer as well as deercreeks tack free then that’s up to you , I have to say there a few people in the states who have this product and love it there is an outlet in Canada but as far as I’m aware not one in the use so maybe if you’re a outfitters in the usa and you’re interested in stocking these kits please go over to www.deercreek.co.uk and mail nick
0-------------------------------------------------------0
VERMONT FLY GUYS 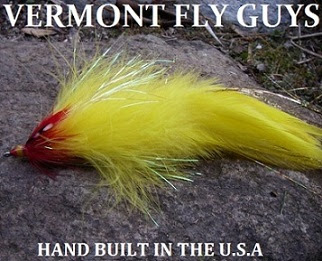 Nice post Dave. You have me running out to get some foam now. That jon boat in the back of the car is unreal.

Ken has been busy and been pumping out some pretty nice ties lately. Good to see another quality local guy having some success.

looking forward to a video in the future on the foam heads they look great!

hey col thanks man , ill wait till i lose the cold first though ....lol