its in the can

bloody weather
so last week didn't get off to the greatest starts i had arranged a trip with all round top geezer will Shaw from
http://www.sexyloops.com/indexsun.shtml 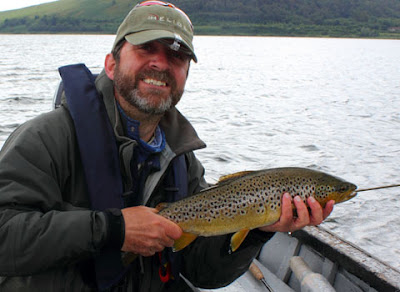 its was to be a day filled with chucking big flies and will laughing at my casting efforts , will is also a casting instructor (and a bloody good one) in the Edinburgh area
http://www.lineslinger.com/ for details ,we have always said we would get a day out at some point together and as happens everything fell into place last week for us to get out on the water .
well that was until the weather decided to cock the whole thing up with rain , snow , thunder , lightning bolts , and the hand of weather doom but paid to that , so we rescheduled for today , today came and the weather yet again put another spanner in the works with rain forecast all day along with another not so friendly wind , so another date has been set and we will venture off again soon (weather pending) but hey that's fishing but i am really looking forward to my day with him .....
tangos
I've had very little time to do much fly tying due to the kids being off school with holidays so I've only managed to grab enough time to do just a few new patterns with the orange barred rabbit strip i got from
www.pikeshack.com
as my last blog post not really sure what i was going to do with it so i kinda just started by chucking a tail section in and that progressed to some marabou in front of that 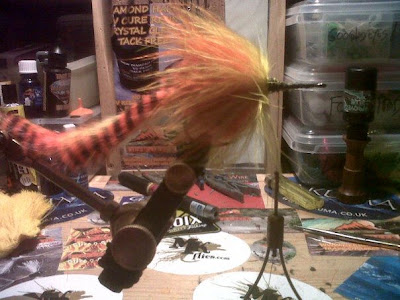 well of course when i get to that point im just thinking subbug so orange subbug it was to be than so i set to work adding in the orange and yellow deer hair to form the head and once i had reached the eye i had a nice bunch to play with .
i love the trimming process its the stage where you really start to bring them to life i tend to trim them with short cuts that way i can get the shape i really want without risking over cutting and ultimately ruining the head shape take a bit of time but ultimately worth it to get the right head ....... 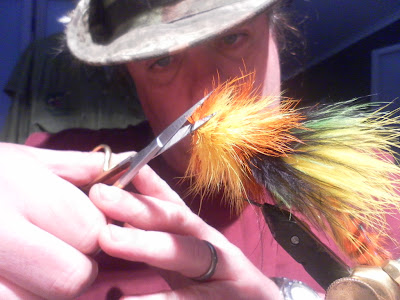 ive started to use diamond hard uv to seal the whipping more and more as it seals it rock hard and no need to wait for the varnish to dry i know the purists will be dropping there custard creams in there cups of tea at the thought of this but we move on and adapt to new ideas in fly tying and this is just another step on that road , of course i shall still be using varnish everything has its place on my desk
﻿ 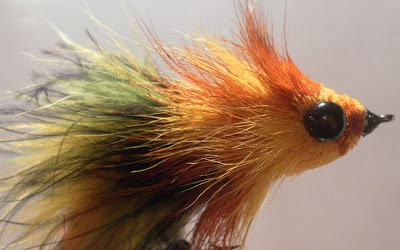 adding a couple of eyes gives the bug that unique action that combined with the cut of the deer hair gives it that irresistible action that is uniquely subbug i love this tie and look forward to giving it a few chucks i think its going to raise some fish
0-----------------0
so as i do sometime while i was doing the bug i had a thought that i should do one in the same colours but using the new dumbbell crystal eyes from
www.deercreek.com the green eyes version are an ideal match for this colour i'm still in the playground with these eyes and there's loads more i can still do with them so watch this space

the head shape on this one is different than normal subbugs as I've tied the eyes in nearer the hookeye leaving a longer hair on the top , just another idea im playing with regarding the noise deerhair makes when stripped again work in progress 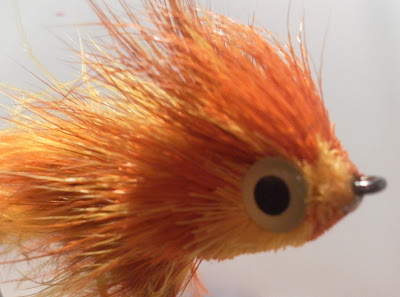 of course i just had to make a bunnybug as well
﻿ 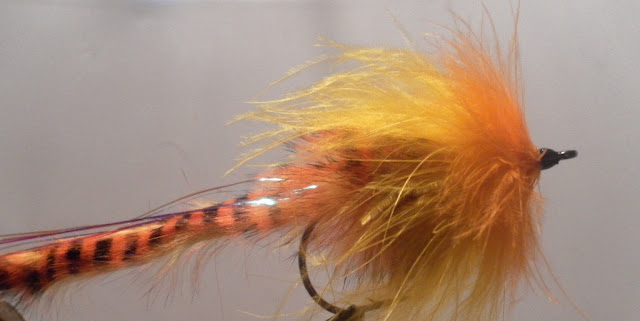 team tango lined up and ready for action 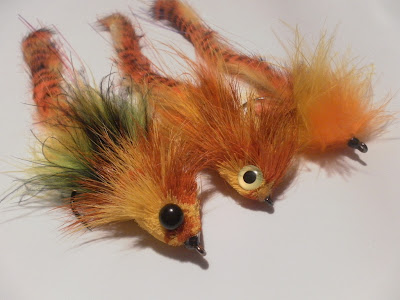 and now for something compleately differnt 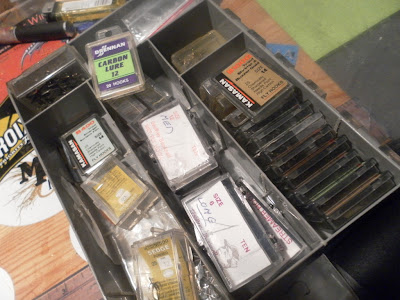 in amongst all my monster predator hooks bundles of 18 inch hair and assorted other stuff for our toothy friends i have a box , a box that's full of small hooks all sorts from lure hooks for rainbow trout to size 14s 16s 22s oh yes this is a strange box for a predator fly tier to have on his shelf , but the reason for it ain't so strange, as i also fish for coarse fish on the fly mainly roach in the early hours of summer mornings there a willy fish and can be frustratingly hard to catch , which to me makes them worth going for i don't like shooting fish in a barrel i like a challenge

its been a long time since ive had a really small hook in the vice and to be honest i do enjoy it after tying thousands of big predator flies , and once a year i stock up on my roach flies 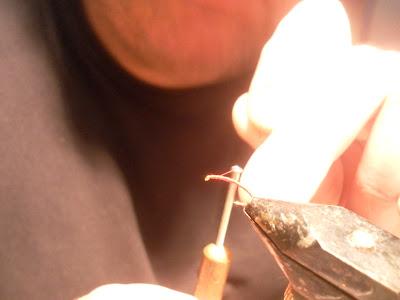 the pattern is a pretty basic bloodworm type pattern its about the only fly i every really use for roach if you don't know what a bloodworm is well A bloodworm is a group of bright red, segmented and aquatic annelids which are capable of growing to a maximum length of 37 centimetres. The worms are a common food source for tropical fish because they live in fresh water. Examples of blood worms are sludge worms, the marine proboscis worms and midge larva for my local canal and being in Scotland its the midge larva that we look at copying there really is millions of the things living in the mud and they are a great food source for the local roach, what do they look like below is a real one 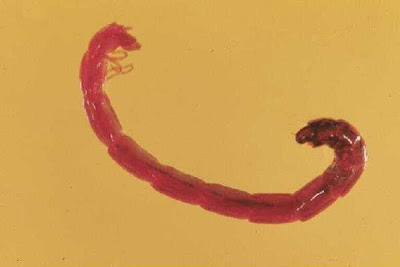 a really strange little creature but a very valuable food source in mud filed holes , as i said it does make a very welcome change to every now and again stock the box up and ill spend a couple of hours doing a load of these and that will keep me stocked up for the year , strange thing is i don't know where last years lot has gone as i haven't lost any up trees ill probably find them in a random box somewhere .
but anyway here's my version of them and a fly that really any coarse fish would eat and it and does me well in fact its pretty much the only fly i used to use on coarse fisheries down south and love using them on the canals here , there's a few variations i tie on these and the ones pictured are tied on gold hooks , the reason for this is that sometimes the flash of the gold can give you the advantage and can make the roach hit hard , although on other days it can scare them and they wont go near them ,
i like to keep my options with these flies as i really don't know whats going to appeal to them hook wise on any given day, so usually what i do is fish a 3 fly rig (usually on a fish pimp yea yea i know its frowned upon) with each of the hooks being a different colour when this way when you start catching fish you'll know what hook they prefer and you can change the other 2 flies to the same hook , i know its not rocket science or a proven technique but it works for me and that's all that counts and its also great sport on a 3wgt . 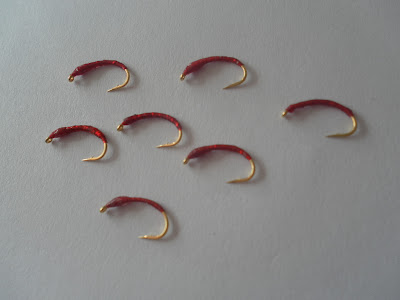 these flies are just the easiest to make all you really need is a flat waxed red thread a single length of red crystal flash (that will do 6 flies) and some of deercreeks new diamond fine UV and that's pretty much it a fly that will catch you fish on any canal in the country
0-----------------------------------0
check the picture below and you'll see the difference to the usual type of flies i do for pike , i mean if you look hard enough you'll see the roach worm at the bottom above it is a normal 7 inch ken capsey natural tie and some really big babies above that including the monster muskie subbug at the top 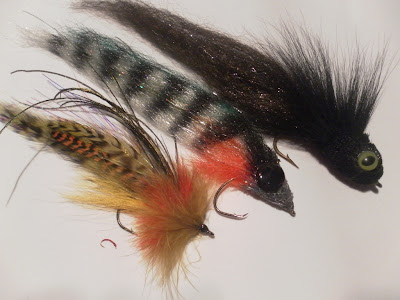 back to the mean stuff 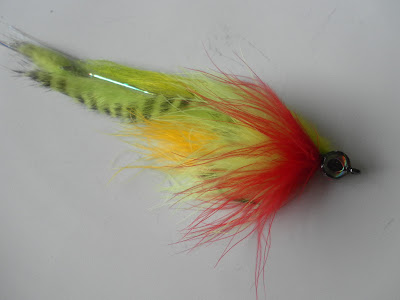 so this week what with the Easter holidays as i explained earlier Ive not had much chance to get at the vice but that will all change come Monday when wife goes back to university and i can get back into my routine , in the meantime i have managed to get some ken capsey (pike adventures/Vermont fly guys) inspired naturals together the fly above and below are the fruits of my labour

brother ken
you know over the years brother ken capsey (pikeadventures/Vermont fly guys)in the red hat has made me howl and made me laugh with some of the crazy shit he gets up to , but today brother ken did the best one yet 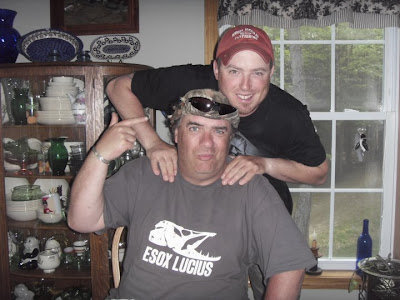 ya see brother ken now has an iPhone and after not speaking to him via skype video call for a few weeks i told him to get his arse into gear and sort the thing out well it took him another couple of weeks to get it out the box (he ain't the fastest fish in the river ) and another week to get it plugged in , well imagine my surprise when i was sitting doing my emails this morning and the skype video box pops up and its a call from ken , imagine my delighted face when not only do i realise that ken has got his skype working on the iPhone but he is actually sitting on the can while he speaking to me ......i cant remember the last time i laughed so much .
ken then stuck the phone on the dashboard and proceed to take me to work down the very familiar roads near his house and across the winooski river where not so long ago i had a fantastic session with the 4wgt wet wading for bass ahhh happy days , and the bonus i'm sitting here in Scotland and i'm going fishing with ken tonight all through the power of a video call , I'm actually impressed with the quality of the call so i think i may just have to go out and get one and take ken fishing here ................let the madness begin
tight lines
mcfluffchucker
(a cave in Scotland)
Posted by dave lindsay at 20:42