life in the cave and freinds flies

so I've been busy with the naturals and been pretty much stuck in the cave tying up some patterns that friends use ,but by adding my own twist to them nothing drastic maybe just adding a new colour into the mix or a different eye colour you know the score , the cave below (that's only half of it by the way) is where i sit for many a happy hour relaxing creating patterns and generally turning my back on the strains of life 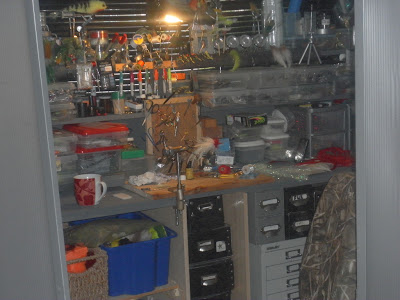 good freind and deercreek tying team member jens from Sweden chucked up one of his new perch flies on facebook the other day and i looked at the fly and thought what a great pattern , jens has had great success with the fly for his perch populations so i thought id tie some up in bigger sizes for pike as i thought it would do really good for them so i set to work. 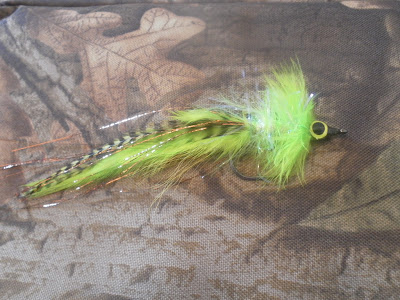 so my first idea was to actually make a duel pattern that i could use for both pike and sea bass that i sometimes fish for and jens pattern ticked the boxes above is my first version using the new fluro eyes from piketrek quite impressed with the overall effect and look of the fly ,and i think it would catch fish whatever situation you find yourself in 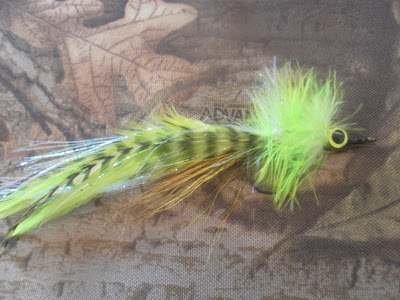 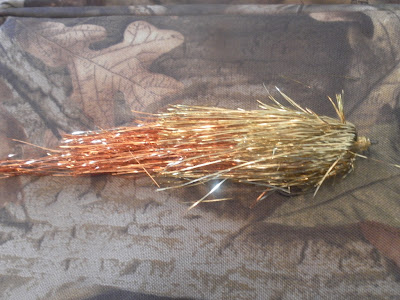 and for n o other reason than i opened a draw and found a lump of gold flashabou in one of my draws i decided to monster up a big pike fly again for no other reason than i could , this is actually quite a big bulky fly although its weight is minimal as you'd expect being made from flashabou , the trick with this to give it some nice bulk in the water is to tie in a small amount of chenille an inch below the hook eye , tie it in a ball and the next lot of material you tie in will give it some bulk to form the appearance of more bulk in the water , without having to resort to lots of material which ultimatley makes the fly heavier .....
0---------------0
looking at the fly above i suspect it would do well on water with high bream content which pike would feed on but being copper and gold it may well also do well on waters with stocks of brown trout in 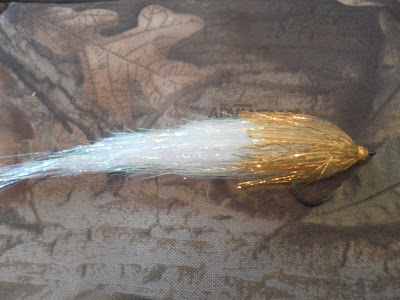 of course flashabou is a lovely material but the only downside is you can only get one fly out of a pack , but there is another option and that's going over to piketreks site and grabbing some of there superb spectrum flash now as you can see from the fly above you still get a great looking flash fly (this one is done in harmony angel) but the difference in price is that a hank of this stuff cost £2.50 and you can get 4 7 inch flies out of it , so its simply down to budget but both work just as well .
0---------------------------------------0
ODE TO A REDNECK
my brother ken is getting some man time in just now so i wont speak to him till at least tomorrows night , but when i spoke to him the other day he was saying "dude you gotta start tying more naturals man " simply because all those years ago it was the very fluffy feather fly tying that got me and the VT crazy talking , so again with if you ask me ken being the master of the splayed fly id steal his idea and make half a dozen up , as to be honest im actually getting right into doing them and im also really looking forward to getting out and putting them through there paces , so once again thanks brother for setting me off down that path again and hope you dig my version of your fly and if it does half as well as yours do then ill be happy .... 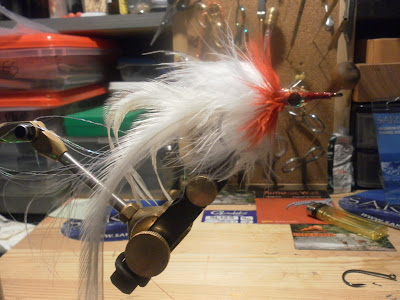 so this week i may get out later in the week , we have some kind of monster wind heading over the Atlantic just now and its due to hit sometime tomorrow night on the west coast of Scotland (Glasgow's area) with 80 miles an hour winds and 27ft waves apparently so i for one wont be trying to get a line out on a remote hill loch so if you are going out well id say don't earn some brownie points and do some diy .

thanks once again for your attention and not resenting the fact that's 10 Min's of your life you wont get back because you read my drivel ..... although i really do appreciate the kind messages and emails

mcfluffchucker
(a cave in Scotland)
Posted by dave lindsay at 12:51