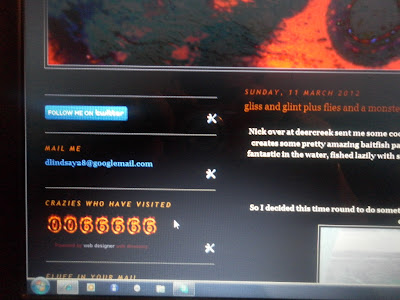 Gliss and glint plus nails it on the baitfish 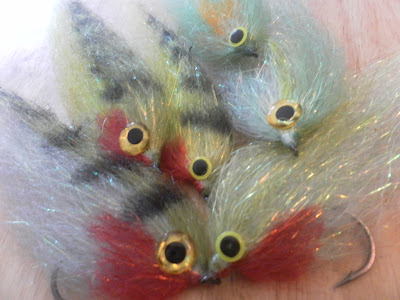 Been banging on lately about gliss and glint plus from the chaps over at www.deercreek.co.uk the reason for this is quite simple the bloody stuff is fantastic it produces when tied right a very realistic baitfish in the water when stripped and paused you get little glimmers of flash just like you see in the water when you see a little flash of a bait fish indeed a very nice material , somebody said to me one why don’t you use sf fibre , well I did for a long time until this came along sf fibre is a great material also but gliss and glint plus is a lot softer and I believe ultimately it gives a better movement in the water , of course up to you what you use this is just my favourite 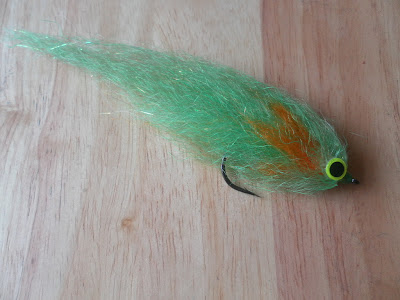 Just because I wanted to I’ve done a pretty much one colour baitfish with an orange core behind the eye I’ve also added in a fluro eye from piketrek http://www.pikeflyrod.com/holographic-3d-eyes/220-3d-prismatic-eyes-silver-9mm-pack-of-80.html a fairly basic old school type eye that looks good this fly is tied on a 4/0 sakuma and comes in around 8 inch’s good sized pike snax 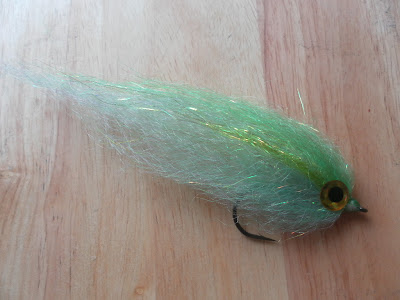 I’ve combined a slightly lighter belly than the back colour and I have added a clump of ep sparkle in behind the eye just to give it a little extra, a big gold eye finishes the job, I’ve also started using deercreeks uv tack free to seal the nose and that’s working great for me so versatile and of course tack free 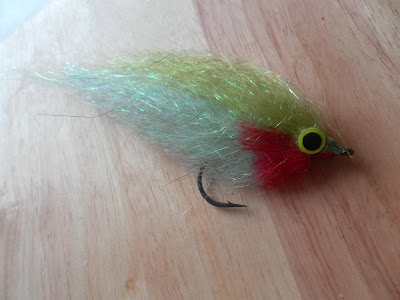 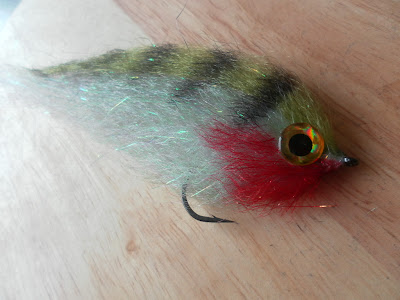 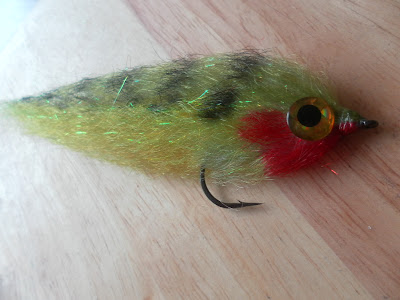 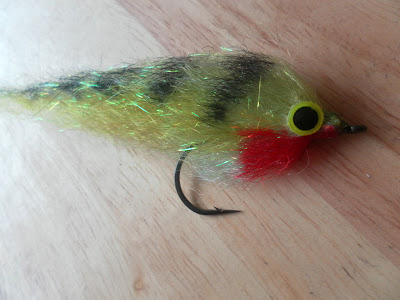 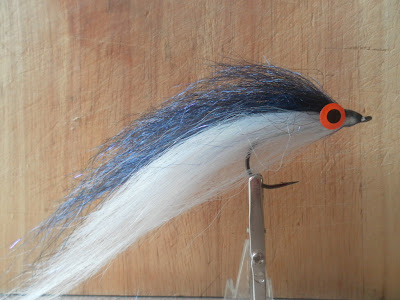 The fly above and the one below I do in a completely different way to the normal ties I do with gliss and glint plus, what I do with these is tie in a couple of long sections for the belly length then I tie in shorter sections from the eye back to around a couple of inches behind the hook, the material amount I use is just enough to get away with in fact if you look you can see the hook shaft through the material.
I then tie a longer section in behind the eye (white) to just after the hook shank, before I tie in the blue gliss and glint plus what this does is gives you a better profile on the back section without having to use a lot of material and gives a massive amount of movement in the water although a very big looking fly it weighs little more than the hook , I do keep trying to put over to people I teach that less is more with these kinds of synthetics and by using like in the pictures nothing more than a few strands you still get a fantastic looking fly that does just the same if not better than using big clumps of material , just look at the fly above you can see the hook through the material that’s what you aiming for a killer fly 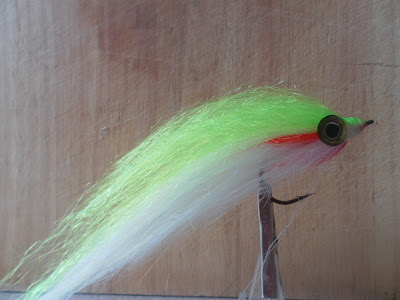 *It’s arrived in the usa*
Gliss and glint plus and tack free UV now available in the u.s.a 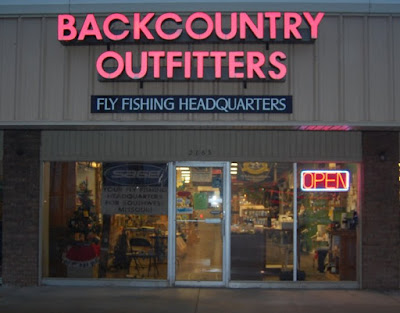 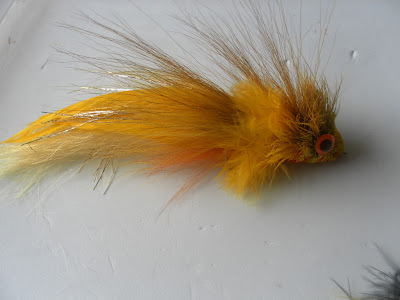 Just adding a few more bug patterns to the box a yellow gold and olive with solid eyes, I love making subbugs but they do take a hellava long time to make compared to the synthetics these flies can take on average of 1 hour per fly I really do put a lot of love into these flies and a lot of thought goes into the process it’s not a case of stack em and pack em on these flies let me tell ya , 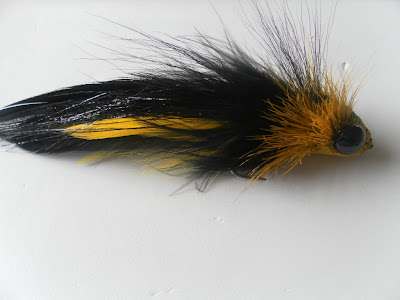 Black and yellow is a colour I really like for pike flies here in Scotland (not sure across the pond) and I had tied this one up and was impressed with the result until I realised that I didn’t have any black bug eyes (there on order) so I had to fluff it all I did was take a great big pair of googly eyes and coloured them with a black sharpie pen, I then used a 5 min epoxy to glue the eyes into place, thing with subbugs is that it’s the eyes that give it the action combined with the buoyancy of the deerhair is what makes them tick , so googly eyes have no weight so therefore the epoxy adds the missing weight that the normal eyes give , I finished off by coating the eyes with deercreeks tack free and hit it with the laser diode to cure it and you have a bloody great looking set of eyes and another coupe of bugs are in the bag ……..
0----------------------------------0
Plenty to do this week with lots of exciting things happening (watch this space) and I may even get some fishing in as well praying to the weather gods right now
Mcfluffchucker
(a cave in Scotland)
Posted by dave lindsay at 19:53

thanks rich you played with yours yet, those new eyes will work well with the bugs i think