"its a perch Jim but not as we know it" 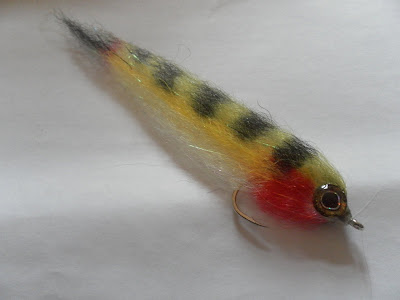 OK so my trip yesterday evening was to really get a hard fighting fish to test the drag of my newly purchased piketrek fly reel (see yesterdays post) so here it is rigged and ready to go i was determined to test this to the limit ... 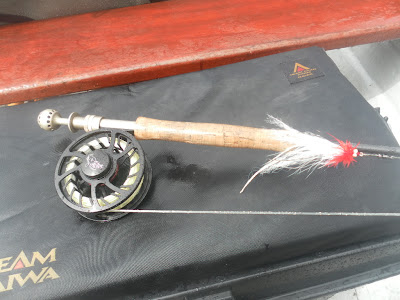 the loch has a micro climate of its own i kid you not as we drove there it was a beautiful evening when we got there it was spitting a bit of rain by the time we loaded the boat and headed out as you can see it was pouring down so it was hoods up and tough it out . 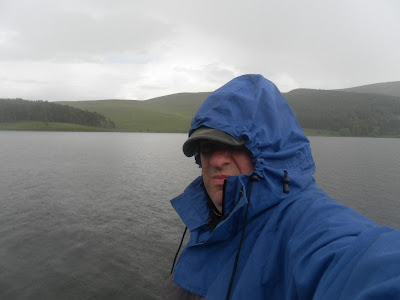 5 minutes later and the picture below shows just how much of a micro climate it is crazy place , i half expected snow 5 Min's later but the sun stayed out and the wind picked up again but you can normally find a sheltered spot although tonight the wind wasn't bad enough to head for cover , and as the evening drew on we knew it would probably die down completely 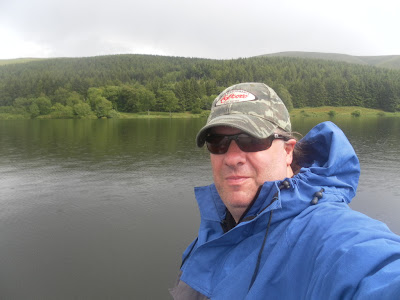 we fished for around an hour before i hit into a fairly reasonable jack pike that put up a right account for itself and really did test the drag system these fish really do pull hard and just don't give up i tightened the drag almost to the limit and the rod doubled and the drag did exactly as it says on the time i must say i was bloody impressed , of course ultimately longevity is the thing with drag systems and i plan on using it quite a lot 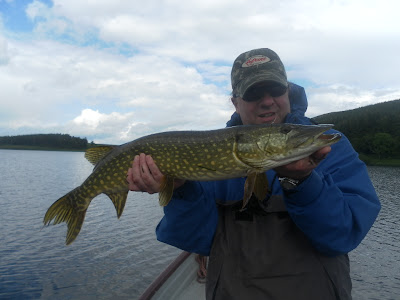 thing had slowed down quite a bit after another downpour so i decided to switch over to a bigger flashy pattern in the hope of just getting a fish annoyed enough to snap at the fly even though it wasn't particularly interested in a meal but sometimes if you keep casting in the same area you'll no doubt annoy something enough that it want to play hard fish ....

well in this case it was a rainbow trout that got annoyed with this crazy ass ed big shinny thing that was in its mud hole and it promptly attached itself to my hook ,again these fish in this loch are fin perfect fighting speed machines and even though this one was only 4 or 5 pounds it really went for it , funnily enough it threw up a very long spine so had obviously been feeding on other fish although i don't know what as there was no skin left on the bones obviously i had the encounter with the big ferrox the other day and obviously the fish in here seem to be taking a liking to smaller fish perfect for the predator fly angler ........... 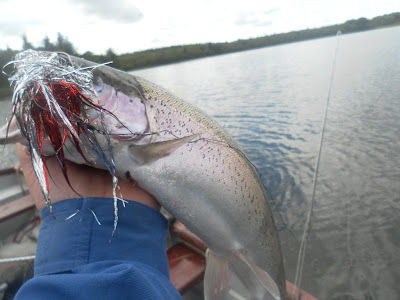 we decided to head over to an area that has some weed on the surface and fish around that , both of us have had fish from this area before so we set up and i cast a line and it fell a bit short of where i wanted it , i.e inch's in front of the weed bed so i stripped back (slowly) just in case and then recast , unfortunately i missed judged the cast and overshot the mark and ended up right in the middle of the weed bed , bugger stuck fast .

i did however think i may be able to point the rod at it and pull it out i applied steady pressure and the crack the running line parted from the head section oh FFS we had no choice but to motor over and retrieve it by hand , the fly was stuck in a top weed so grabbed it and retrieved it funnily enough it actually broke behind the joint so still fixable because believe it or not i only lost a few inch's of the running line .....
----------------

OK so that was somewhat unfortunate but hey it happens , so i changed reel (remember the spare spool thing i was talking about yesterday) so i loaded up an airflo t7 with a Rio striped bass intermediate and chucked on a perch pattern (seen that before somewhere) made from sf fibre and slink n flash and tied on a gamakatsu sl 6/0 , so while i was messing around with that we decided to head for another area with slightly deeper water 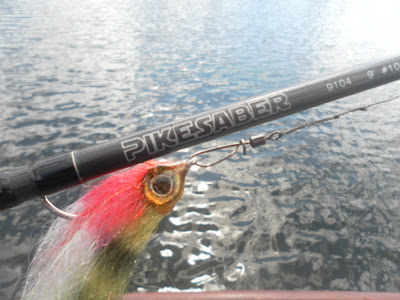 we hit the spot and threw the anchor out and started to cast the first cast i had a couple of tugs which was encouraging but nothing solid so i decided to switch down to a smaller fly (the perch is fairly big) i decided that it it may be smaller jacks nipping at the tail end so i went down to my version of a Dan blantons flashtail whistler , i clipped it on and fired out a long line , just as i did i heard a splash at the side of the boat i looked down and then realised that it was my reel spool the frame was still on the rod , oh really give me a break 2 major f**k ups in a day .

as you can see from the picture below my backing showed the way to where my line was , i cursed a couple of times and Stevie said to me "hope you've tied the backing on" well i always do that but as soon as Stevie said it i though shit did i tie the backing on well after 5 Min's of carefully pulling up the backing by hand i felt weight and it stayed till i got it back in the boat i had done what i normally do and tied the backing to the reel what had happened well i hadn't tightened the locking nut down properly , the first cast had loosened it the second had made it come off, that's a lesson well learned ........ 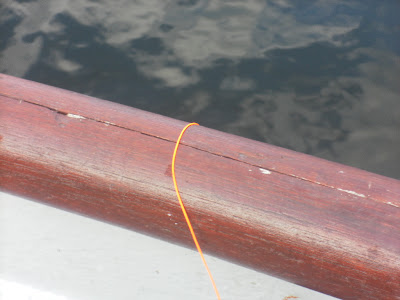 so with that i was surely due a little luck so i whacked the fly out again and was rewarded with a small jack , oh well looks like my theory was right and it was just small fish in the corner , with that we up sticks and headed back to the most productive area of the loch to see if we could prise a few more out before sunset , sometimes its worth taking a chance this time it didn't work in our favour but do the same thing again the next day and you could hit gold that's fishing for you 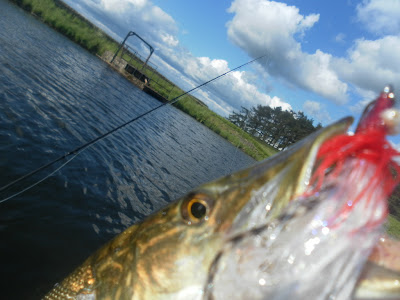 so another area and the wind has died done a lot so we fire the fly back out , Stevie my boat partner has a couple of follows from small fish i decided to take thing a bit easier so i sat on my butt and took a couple of easy casts counting the line down to explore different depths as i sat in the zone counting down i felt a whack on the back of the head Stevie had cocked up a cast and got me a cracker if i wasn't sitting down i would have got it in the butt ...ouch 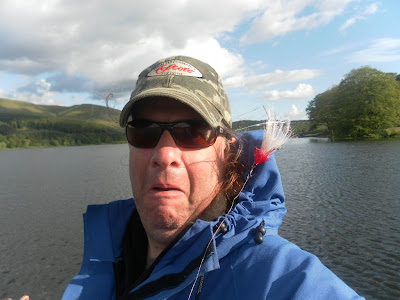 so will no fish for a few hours (don't you just hate those quite periods) we decided to hit a few spots but to no avail we decided to give it till 9 pm (about an hours fishing time left) and Stevie also suggested that we hit an area that we hadn't fished before , so we hit the spot and bang second cast in a channel between the weeds i hooked up what would be my last fish of the day a feisty spirited beastie it was as well.........happy days 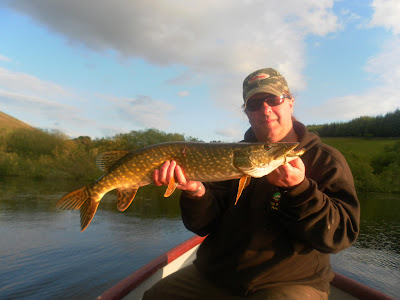 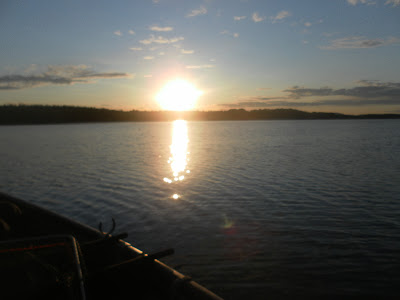 stay tuned for some great adventures and again if your heading out be safe , and tell somebody where your going and what time you'll be back it does make a difference