video killed the radio star and a free economy

i had a skype video call from a chap who wanted to chat with me and this is what had happened , he had bought a couple of pike flies from flies**line (not allowed to name them) and he was under the assumption that these were flies from Richard Todd at ukpikeflies.co.uk , now Richard produces some fantastic hand tied pike flies and they are of the best quality you can get , Richard like me puts a lot of time and effort into his flies .

so when i got the skype call i was shocked to see this fly had fallen apart before even seeing water , i looked at the fly through the medium of skype video i realised that it wasn't one of Richards i asked where he got them and i headed over to the site to find some really crap copy's of Richards flies , now like Richard i know that flies are copied that's the nature of fly tying and to be honest there probably nothing original out there in fly tying and we all feed of each others ideas and stuff and its a compliment when people do make flies that you have done and most of the time people will say where they got the idea ,i know i do if something is based on someones pattern then ill say so . because that show most fly tiers roll

but then you get the leeches like the guy who has had cheap shit copies made in china on crap hooks and then sell them as quality pike flies on there site at a fraction of the cost that the original tyier sells them for well listen let me tell you its a false economy because that fly you bought cheap will fall apart with one fish is you even manage to get it in the water so don't even bother buying that crap go to the original site (in this case www.ukpikeflies.co.uk) spend the extra few quid and get something that's going to last you a hell of a lot longer and more fish than that crap in the picture .............. and if your the owner of the site that sells that garbage you know its one of Richards flies don't try and deny it pal because i know for a fact it is along with the other garbage you call pike flies , stick to the trout flies

black is the new chartrues 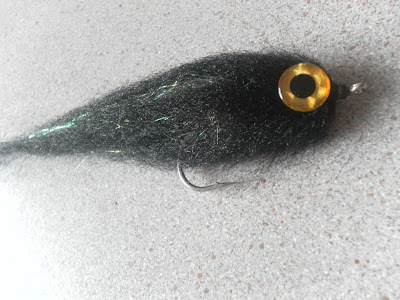 I've been going a bit black crazy over the last few months and with good cause as its a devastating colour and all round fly to use the thing with me is i do like to tinker with flies and love to add a bit and try new ways to do stuff , the fly above i made with black ep fiber and green awesome hair flash through it , with this fly i tied the head bullhead style and trimmed it and I'm really happy with the results 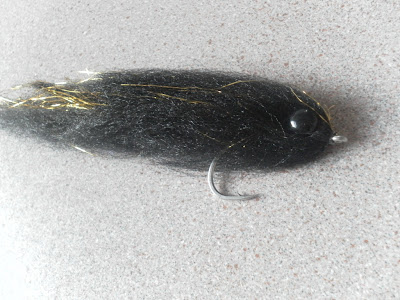 this fly I've done with gold awesome hair but not tied the ep in bullhead style I've tied it hollow style , to be honest although i know it will fish fine I'm more happy with the bullhead style , but that's what its all about trying new things to see what works ill still fish this though

hope you enjoyed my ramblings yea Spielberg i ain't but you know i don't care i just enjoy doing them and if i can be of help to someone then hell why not help a buddy out then I'm quite happy to do it , and again feel free to share this video on your website or blog just let me know where its going (this video is not allowed to be used in china) so with that ill bid your farewell and see you all soon

(a cave in scotland)