finding breakfast and a rare catch

so august has arrived and so have my skinz reel baitfish body, delighted to say i now have a page set up so you can purchase your very own bottle of this wonderful stuff here is the link to the blog page if you wish to order a bottle .
SKINZ 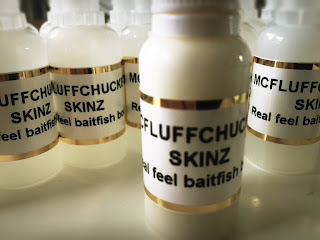 below are some examples of what it can do 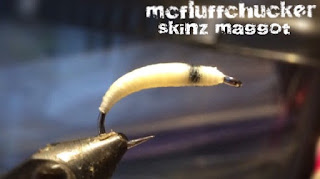 so far this is the most life like maggot i have made and is proving a real hit with not only trout but with the carp fly fishers as well , there is a video on how to make these on the page , great all round fly 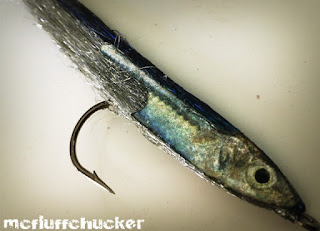 next up i made a body with deercreeks silverside fish heads and coated with skinz to make a very realistic baitfish , heads are available here silversides fish heads 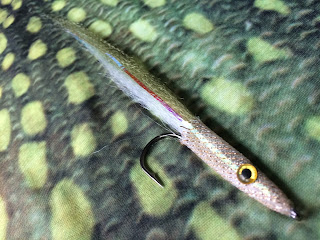 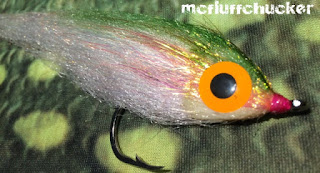 this is skinz done on a large gliss n glint fiber pike fly , the skinz dry clear creating a lightweight counting around the eye and head the perfect in between for epoxy and uv resin 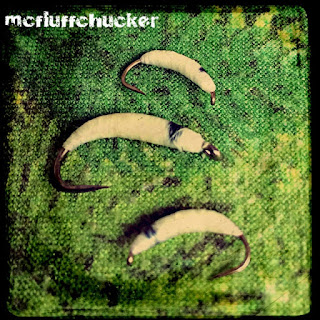 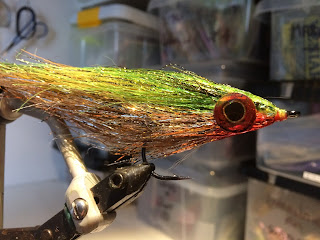 and so to fishing

well start of august and i decided to have a bash for the local mackerel , and yes i know easy fish to catch and all that ,but i enjoy eating them fresh out the sea and they are always fun to catch on light gear 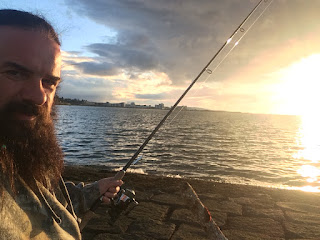 the eagle eyed among you may see that i am actually using a lure rod (shock horror) well the reason is actually quite simple the spot that i go has quite a few dog walkers and folks out walking and im a bit stuck for casting space and i generally dont like hooking the locals on the back cast even if it is there fault , but all that aside i tend to fly fish on the later or early morning tides when theirs nobody around 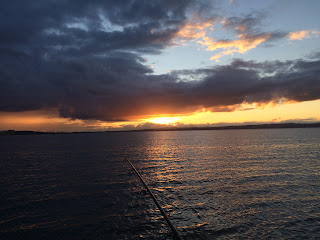 cant beat a good sunset , one of the joys of where i live 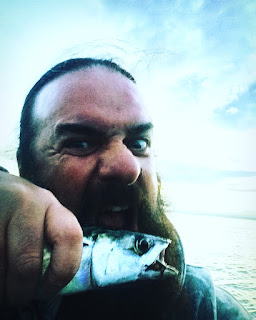 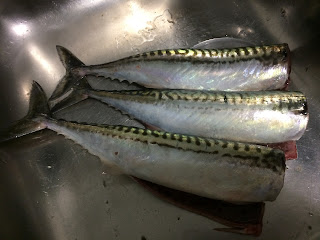 straight home gutted and filleted ready for tea the next day and they tasted fantastic , far better than  your local supermarket so called fresh fish and you know i enjoyed catching them on the light gear , yes better on the fly but needs must and if you haven't tried it then you really should great sport.

ANOTHER TIDE AND A BIG SURPRISE 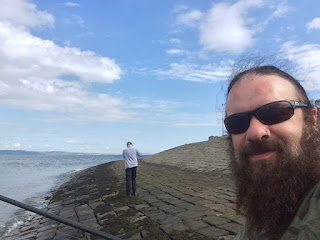 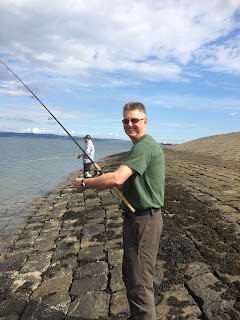 and then a fella came along and started to have a chat with us , turns out hamish was from new zealand and was over on holiday with his wife , unfortunately hamish hadn't bought any gear with him so in the tradition of fisherman worldwide gave him a few casts with my rod , hamish was obviously a concomitant angler and more that happy a fellow angler 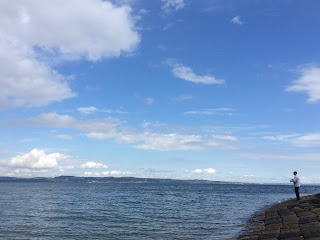 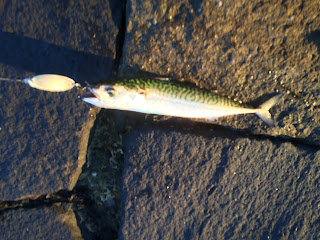 so the mackerel soon started to show 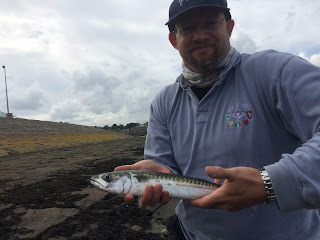 and then this happened

i was casting around in the crystal clear water and this attacked my lure right under my rod tip , i honestly thought it was a seatrout , all i saw was a flash of silver and the water exploded in front of me within a few seconds i had this in my hands , an amazingly rare twaite shad no these things are seriously rare in Scottish waters indeed any waters let alone on the shores of Edinburgh in my forty plus years of fishing i have never seen one let alone catch one so to say i was overjoyed is an understatement. if you want to know more about this amazing fish here is a link 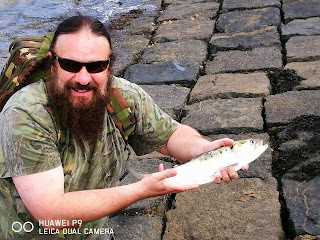 here is a close up of the shad , a few scales came off as i was unhooking it but they have loose scales and the fish was released and swam away strongly a quick unhook and a picture and it was gone . 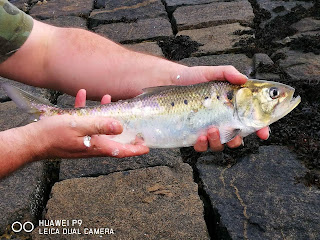 so with that we packed up , i had zero mackerel duke had 3 no idea why that was but hey who cares when i had a fish like that 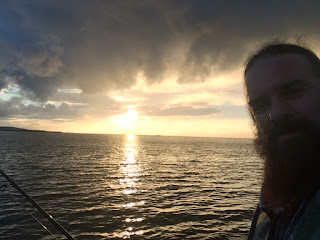 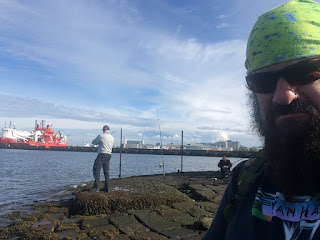 No fish but nice evening out despite an Argument with an elderly Eastern European about why he shouldn't park up right next to my mate with with his 2 beachcasters and 40 baited mackerel feathers , my mate went to his bag behind him to change lure and this guy stepped into his spot with another beachcaster.
Straight away I said er no mate and went over to him and explained that we were fishing in this spot and explained that he shouldn't fish so close as it's possible we would catch his line and we'll it wasn't really on fishing that close anyway .
Well the crap hit the fan and he started screaming at me saying did your fathers fight in the war well actually not that it's got anything to do with the current situation but yes they did my great grand father fought in the trenches in ww1 my dad was in the Scots guards and my uncle was a pilot in the Battle of Britain .
Now I'm done with you mate piss of , sorry but I was being diplomatic and friendly it this guy wasn't having it , thankfully I walked away before I threw him in , kinda spoiled an otherwise nice evening

😡
Sorry to rant but this really boils my piss
im sure if this happens again i think i will lose the plot and plant the twat sorry but dont come to my country with your shit attitude and no respect for other anglers , seriously i need not see this idiot again 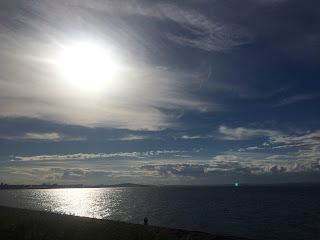 so that has been that of late , although i have been doing a hell of a lot of flies and some great stuff even though i say it myself but more on this next blog which will be next week as im fishing and tying subbugs for the rest of the week 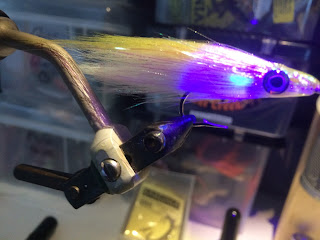 so next blog ill be reviewing the amazing uv glow varnish from deercreek (above) and i had a really great customer experience with the chaps at silver scales fly tying https://www.silverscalesflytying.co.uk/fly-tying 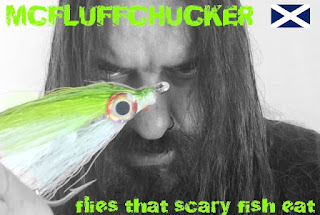 Posted by dave lindsay at 17:41 No comments: 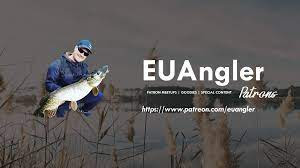